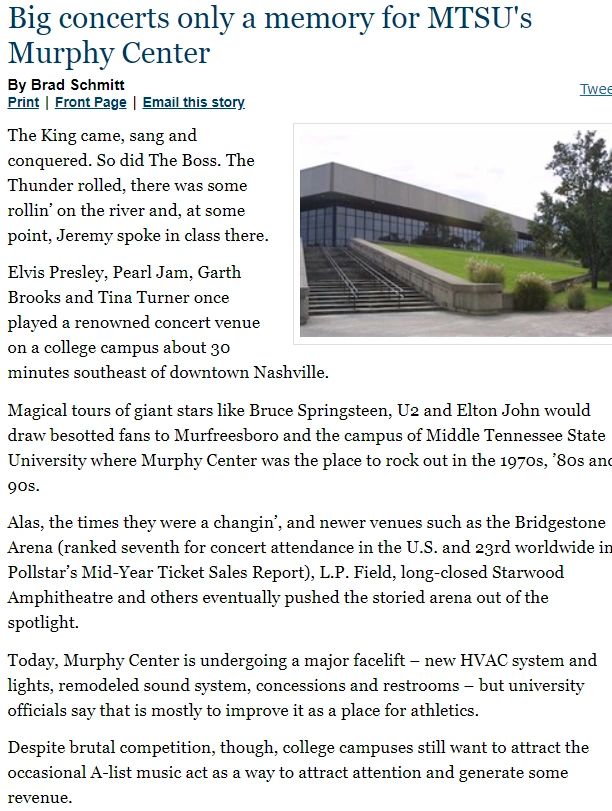 VIDEO: From 1973 through the mid 1990s, arena acts didn't play Nashville, they played Murfreesboro. For over 20 years, Murphy Center on the MTSU Campus was the venue for epic concert performances from Elvis to U2 to Garth Brooks, as well as WWE and WCW events, the Judds' Farewell Concert, Charlie Daniels' Volunteer Jam, and much much more. Eventually Nashville built bigger venues like Starwood Amphitheater and Bridgestone Arena that killed the Glass House's mojo, but the era of epic shows lives on in the memories of Boro residents and MTSU alumni.   Filmed and edited by Dave Stripling of Stripling Media, and featuring Harold Smith, Dr Michael Fletcher and Donna Baker

Elvis Presley: Let Me Be There, Murfreesboro TN 1974

Volunteer Jam II was held at the MTSU Murphy Center

The Judds - Give A Little Love (Farewell Concert)

Up until the rise of Brooks & Dunn in the '90s, the Judds were the most commercially successful duo in country music history. Mother Naomi and daughter Wynonna enjoyed an astounding run of 14 number one singles from 1984 to 1989, ranking them as one of the most popular country acts of the '80s. Though their off-stage relationship was often more contentious than it appeared, it took a life-threatening illness to bring the Judds to a halt -- Naomi retired from performing when she was diagnosed with hepatitis C but beat the disease to watch Wynonna enjoy an acclaimed solo career. Video from YouTube.

Take Our Concert Tour : Click on the Next Button

Our Exit/In page, featuring the 40th Anniversary of the Exit/In.